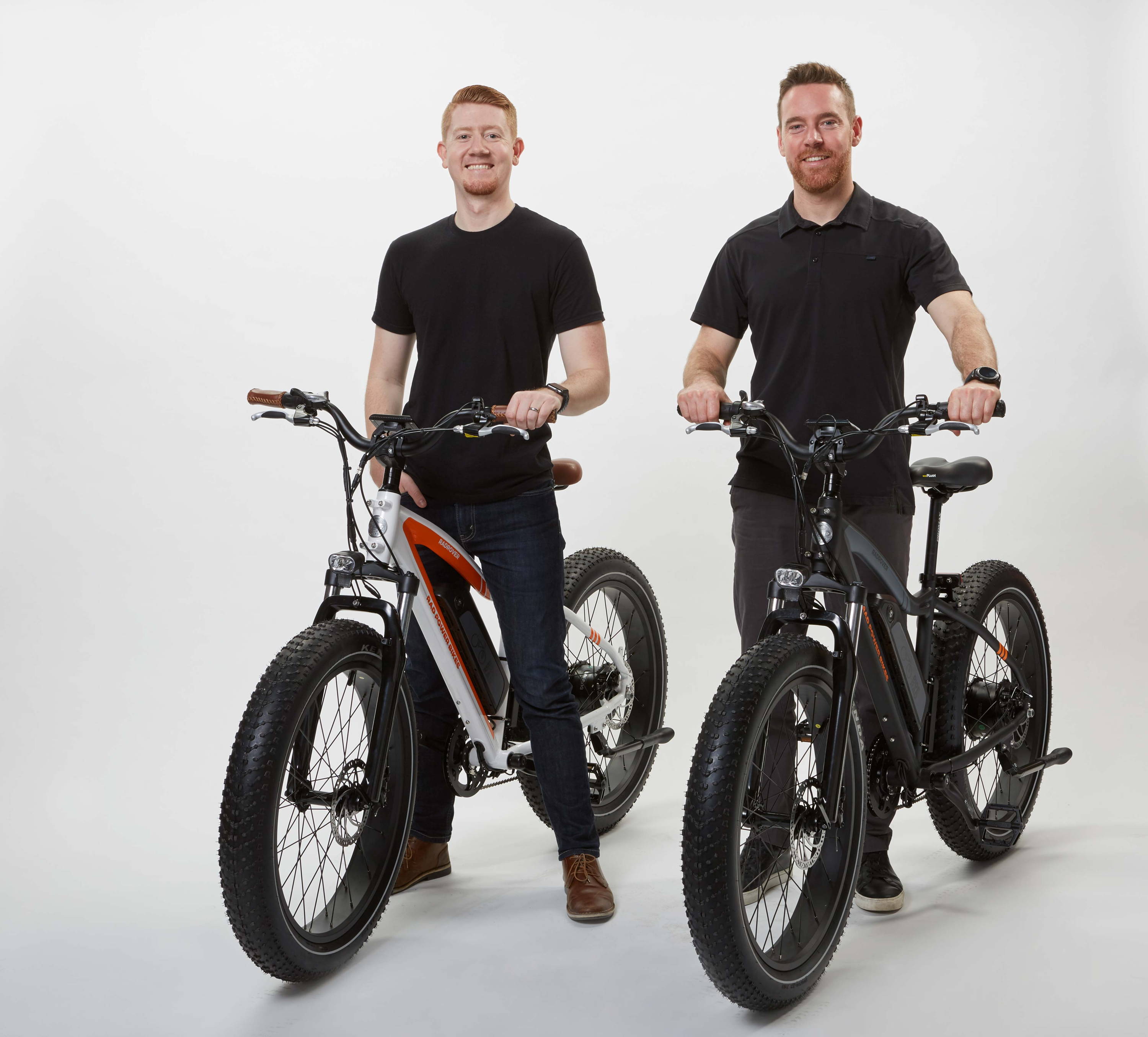 Rad Power Bikes is a Seattle-based electric bike company that is changing the way people and goods move. Their lineup of feature-rich - and fun - electric bikes are brought directly to the consumer at wholesale prices. By making ebikes more accessible through this approach, they are revolutionizing transportation options for the masses - including individuals, businesses, police departments, organizations, tourism destinations, and more.

Rad Power Bikes was founded in 2007 by childhood friends, Mike Radenbaugh and Ty Collins, who are now Forbes and Inc. Magazine “30 Under 30” recipients. The company re-launched as a direct-to-consumer business in 2015. They grew sales by 350% between 2016 and 2017, and grew from 20 employees to 80 employees in 2018 alone. The company operates internationally with headquarters in Seattle, Wash., Vancouver, B.C., and Utrecht, Netherlands.

Rad Power Bikes Mission Statement‍
Our mission is to offer an unrivaled customer experience with radical electric bikes that are built for everything and priced for everyone.
Vision
‍Our vision is a world where transportation is energy-efficient, enjoyable, and accessible to all.

What started as a passion project is now the largest ebike brand in North America, with more than 100,000 owners riding Rad across 30 countries. Rad Power Bikes is a consumer-direct business that designs electric bikes that are packed with power, comfort, and utility, and we bring them directly to customers at radical prices. Our affordable ebikes and accessories are backed by localized product support, so you can leave your car in the garage and join the ebike revolution. Our mission is to offer an unrivaled customer experience with radical electric bikes that are built for everything and priced for everyone. We envision a world where transportation is energy-efficient, enjoyable, and accessible to all. Headquarters, showrooms, and customer support based in: Seattle, Washington (global HQ) Utrecht, The Netherlands and Vancouver, British Columbia.

The fat tyres are very fun as they can tackle terrain that traditional tyres cannot. You receive a lot of grip, stability and comfort. The RadRhino, for instance, can ride on surfaces where normal bicycles fall short, such as loose sand and snow. If you are able to, give it a test ride. You won’t be disappointed!

Can I test ride a bike?

Yes! Check out our Where to Ride page to see our large network of rental and test ride locations, and to see if you're in our Rad Mobile At-Home Test Rides service area.

Visit us at our showroom in Utrecht, The Netherlands. Here you can test ride our latest lineup of ebikes. Click here to go to the showroom page.

What is pedal assist?

Pedal-assist uses a cadence sensor built into the drivetrain of the ebike which reads when you are pedaling and automatically turns the electric motor on to assist when you are pedaling. Start pedaling and the sensor tells the motor to turn on. You can adjust the level of assistance with the LCD screen from 1 (lowest amount of assistance) to 4 or 5 (highest amount of assistance) to match your desired speed. For more information have a read here.

Can I ride without power?

The great thing about our ebikes is that they can be pedaled just like a traditional bike. By turning off the bike or switching the pedal assist level to 0, a rider can pedal and ride the bike, and can even shift gears when desired.

Pedaling an ebike without motor assistance may require a bit more effort to start than a traditional bike because an ebike weighs slightly more. However, that means your bike is equipped with a robust and powerful motor and a battery pack capable of propelling you forward whenever you choose!

Can I change the speed of my ebike?

All our bikes have a top speed of 25 km/h. Our ebike models have been specially designed to abide by European laws. If the motor or controller is modified, you could be breaking the law in the country that you live and you will lose any warranty claims from Rad Power Bikes.

How do I return a bike?

Please follow the guidlines to issue a return here.

Do Rad Power Bikes have gears?

All of our bikes, except for the RadRunner, use a Shimano 7-speed gearing system and thumb shifter.

Can I carry things or passengers on my bike?

Yes! Each model is designed with carrying cargo in mind. To find information related to your model, check out the Geometry & Sizing specs on the product page.

The European RadRhino is based on the flagship model of the North American RadRover which, is available in Canada and North America. Each bike has been manufactured to follow local laws and regulations of the respectful country in which it can be purchased.

View the full features of the RadRhino Electric Fat Bike.

Can I change the orientation of my bike levers?

Making any modifications on your bike could lead to our team not being able to assist you with troubleshoot problems and forfeiting your warranty terms.

Why can't I order from the US site?

For us to be able to sell the bikes legally in Europe, we manufacture our bikes to follow local laws and legislation. Therefore you are not able to make any purchases from our American or Canadian site and have it delivered in Europe.

Any attempts to transport a US model into Europe could lead to your bike being illegal in a European country. We take no responsibility and will not be able to offer any support with warranty or technical issues as software and hardware parts differ.

Which payment options do you offer?

To make the payment of your order as easy and flexible as possible, we offer you different payment methods. You can make your choice at the end of the ordering process.

Your choices currently on our online store are:

For some customers, we need to make a special invoice. In such cases you will also be able to pay via bank transfer. Contact our customer service team to place an order via phone or email.

Every product on our site you will find the current prices and shipping costs. All prices are shown including VAT.

My credit card payment was declined. What do I do?

There are several reasons that your credit card could be declined, these include:

Which countries do we deliver to?

Below is a list of all the countries our bikes can be shipped to:

Countries we do not ship to include:

*Currently we can not ship to Iceland due to battery issues.

How long does shipping take?

All orders are usually dispatched within 5 business days from our warehouse in The Netherlands. Delivery time is dependent on where you live. Currently during the COVID-19 pandemic, deliveries can be delayed depending on local country restrictions and regulations. We appreciate your patience and understanding during this time.

Will my bike be fully assembled upon delivery?

All Rad Power Bikes will be delivered nearly fully assembled, which means there is some assembly required before you can Ride Rad. Items that require assembly include the handlebars and the front wheel, and screwing on the headlight and pedals. Additional accessories will need to be mounted by yourself. If you pick up your bike at our shop in Utrecht it will be fully assembled!

You can easily assemble or attach accessories yourself with the assembly instructions supplied with every product. For further assistance, you will find all the necessary manuals and additional information via the Owner's Tools page.

How do I service my bike?

For any customers that wish to have our service team take a look at your bike, you can make an appointment via eu-support@radpowerbikes.com.
+31-85 7470430

If you want to do it yourself, check out our handy videos here.

Visit our Owner's Tool page for all assembly vidoe's, manuals and more!

There is an error message on my bike?

If you experience any error codes, please contact our product support team: eu-support@radpowerbikes.com | +31-85 7470430

My bike got stolen, can you help?

In case of such an unfortunate situation, please get in touch with our customer service team to see if your stolen bike as been reported to us via eu-support@radpowerbikes.com | +31-85 7470430.

It’s a good idea to keep your order information, such as your order confirmation and serial number, for your personal records. For general bike security, check out our suggestions here.

We also suggest registering your bike with Bike Index or 529 Garage. Both are free services that store your bike's information in a database that is searchable by police departments and bike shops. This can be helpful if your bike is lost or stolen.

Read our full terms on warranty on this page.